Foxgloves in Graphite and Watercolour

My Foxgloves workshop will be at the 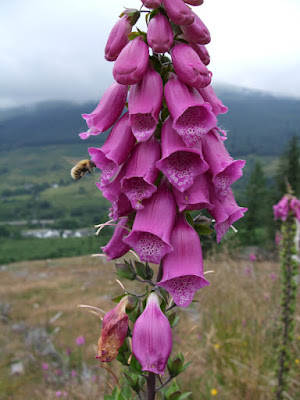 Find out about these fascinating plants with botanical artist Bill Phillips. Foxgloves are poisonous but featured in folk medicine and were an important source of drugs to treat heart disease. Bill will describe the structure of foxglove flowers and how this relates to bumble bee pollination. Working from real specimens and photographs, you will develop your own composition and explore the graphite and watercolour techniques needed to produce an attractive final painting.

All materials can be provided, but bring your own if you prefer. Price includes a soup and sandwich lunch. 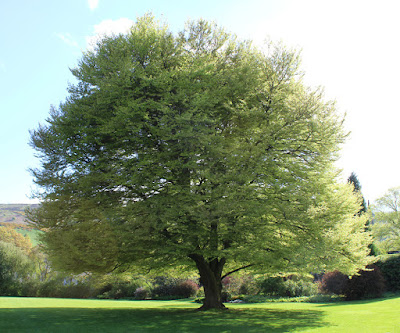 You can see the feathery foliage typical of this unusual variety of beech tree. The photo below shows the shape of the leaves and male and female flowers present at this time of year. 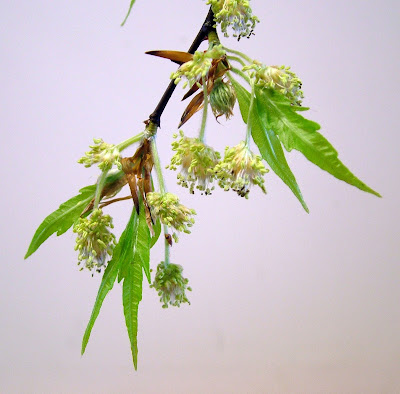 Cut leaf beech trees are not common. You can sometimes find them in botanic gardens including Edinburgh and Dundee and sometimes in the gardens around stately homes. Glamis Castle has a splendid example and there is an avenue of cut leaf beech along the drive leading to St Martins House, near Balbeggie in Perthshire.

The cut leaf mutation is a heritable characteristic and cut leaf seedlings can be found growing close to parent trees. However, the mutation does not appear to be altogether stable. Most cut leaf beech trees have some shoots which have reverted to the normal leaf shape.
at May 08, 2019 No comments:

According to one definition, to be 'native', the species must have been present at the point when Britain became an island.

This happened around 8000 years ago as a result of a catastrophic event, known as the Storegga Slides, when a large section of the Norwegian coastal shelf collapsed, releasing a landlocked sea and triggering one of the biggest tsunamis ever recorded. The water struck the north-east of Britain with such force it travelled 25 miles/40 km inland, turning low-lying plains into the North Sea, and marshlands to the south into the Channel.

After this, melting of ice from the previous glaciated period continued to contribute to rising sea levels.

How do you tell the difference? The key difference is that the acorns of Q. robur grow on stalks, whereas the acorns of Q. petraea grow directly from the stem with no obvious stalk. If you can't find any acorns, or it is the wrong time of year, leaf features help you to decide.

An auricle means a 'little ear'. The leaf blade of Q. robur is extended into small flaps on either side at the point where the blade meets the petiole, or leaf stalk. In Q. petraea, the leaf tapers to the petiole.

The Birnam Oak is an example of Q. petraea. The tree is at least 500 years old, one of the last remnants of an extensive oak forest.

20th October proved to be a mild and glorious autumn day.. perfect for sketching and photographing this ancient tree: 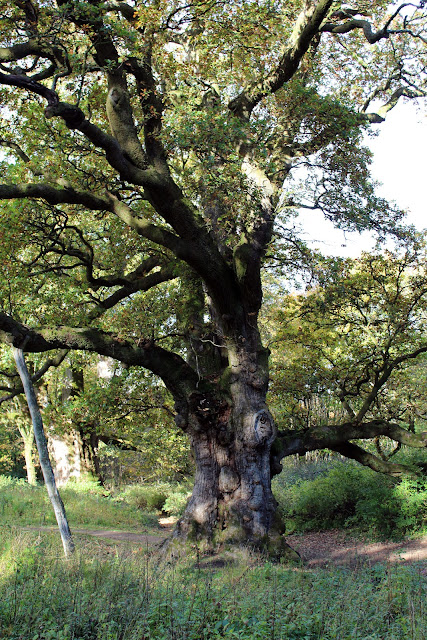 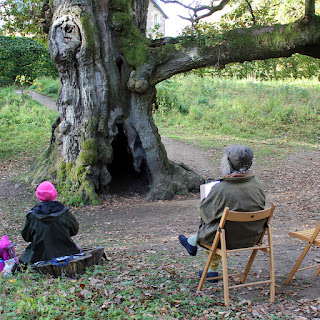 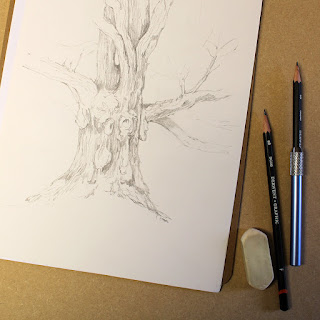 Sketching pencils from Derwent have a wider core than graphic pencils. Both types are available in a wide range of softness/hardness. Grade F is a special grade for drawing, with a hardness somewhere between H and HB.

I use F grade Derwent, Faber-Castell and Staedler pencils for most of my drawing, with softer B, 2B pencils for shading. The softer pencils allow a darker mark, helping to develop shadow areas. Experiment with different ways of holding the pencil, and different ways of making marks. Removing graphite with a precision eraser can be a good way of indicating texture.

I am a bit of a fan of pencil extenders. These improve the balance of the pencil and allow you to keep using pencils which have become shorter/much shorter through use. 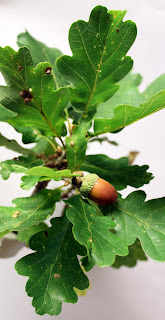 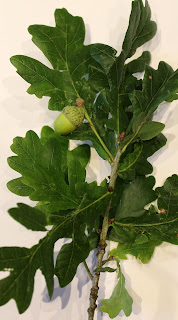 Back at the Institute, we explored colour mixing: 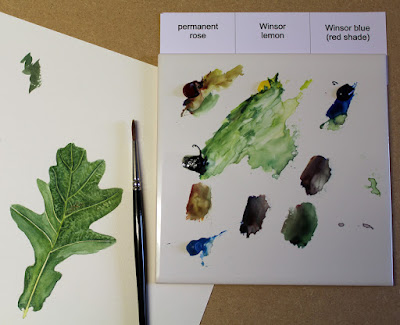 It is a mistake to think that you need huge numbers of different colours of pigment to develop a watercolour painting.

Winsor & Newton recommend the following pigments for a three colour system of primaries:

For a six colour system, the colours are:

I have found it effective to work with the three basic colours, with occasional additions of other colours. In particular, I often use Indigo and Cerulean Blue, and sometimes Winsor Yellow.

This approach keeps colour mixing simple. Once you have mastered mixing from just three primaries, you can experiment with adding new colours to your palette.

Many botanical painters avoid using green pigment, preferring to mix greens from blue and yellow. As you go, you can subtly adjust the mix, a little more yellow for a lighter green, or a little more blue for a darker shade. This avoids painting a uniform block of the same colour straight from the tube. Adding a hint of red makes the mixed colour less vibrant and allows you to match a whole range of additional colours.

Remember, your TV is an RGB device, meaning that all the colours you see are achieved by mixing Red Green and Blue light. (Mixing colours of light is different from mixing different pigments)

Your inkjet printer is is a CYMK device. All the printed colours are mixes of Cyan (turquoise blue), Yellow and Magenta. 'K' means 'kappa' and refers to black ink. Darren Woodhead, a wildlife painter, worked successfully for years with a basic palette of cyan, yellow and magenta as an alternative to the traditional primaries.

If your TV and inkjet printer can match a vast range of colours using just three different primaries, so can you!

Watercolour generally involves layering. I began my painting of the leaf in the photo with a yellow green wash along the line of the midrib and main veins. This was allowed to dry before painting with dark green to fill the areas between the veins, taking care to keep a fine line at each side of the vein. Lay down a line of a darker colour next to the vein, rinse your brush, remove excess water and soften the edge of the darker colour, merging it into the main part of the leaf.

Once your first washes have dried completely, surface detail is added with stronger colour and a dry brush. You can also lift out detail with a small brush.

Think always about where the shadows fall and where there should be highlights. Good dark shadows help to define form.

When you have engaged with the subject of your painting by sketching and studying its form, there is no reason why you should not continue working from photographs... 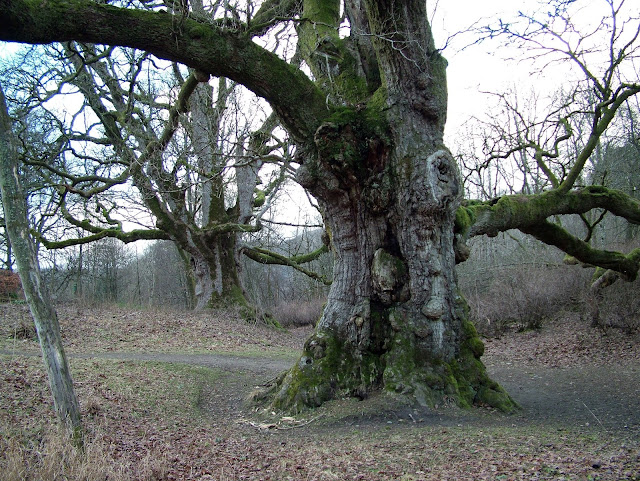 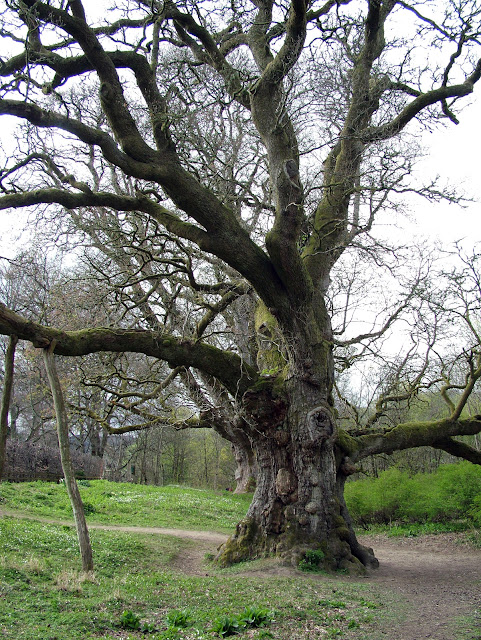 These two photographs of the Birnam Oak were taken on different days. Both could be developed as paintings, or as rendered graphite images.

I think the Birnam Oak deserves a BIG painting. One method of scaling up from your printed photograph uses a grid: 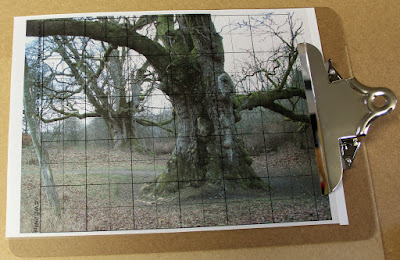 My grid is printed on acetate sheet which I can put through my inkjet printer (email me at wdphillipsart@gmail.com if you would like me to send you a PDF). The grid is marked in 2 cm and 4 cm squares.

If you want to double the size, mark your paper as lightly as you can with 4 cm squares, or 8 cm squares, if you want to quadruple the original size. Draw grid lines in one direction, but use small short marks where the grid lines cross in the opposite direction to reduce the amount of rubbing out you will need to do later.

Using grids is respectable. Lots of professional artists do it.

I didn't use a grid for my large painting of the Birnam Oak, but I wouldn't have felt bad about it if I had! 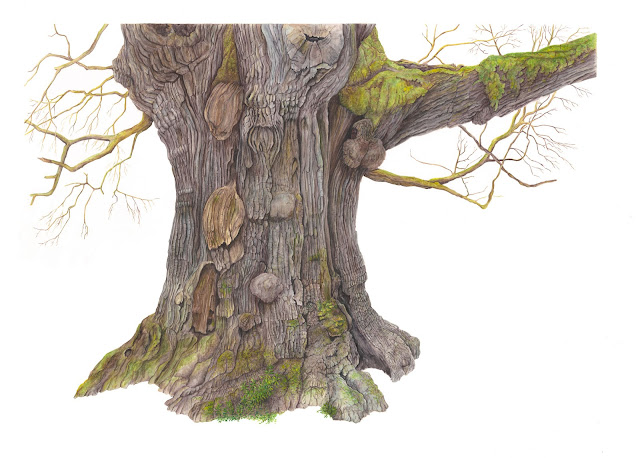 This is what storm Desmond did to the Birnam Oak: 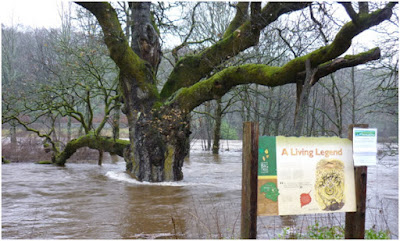 Our ancient trees are under threat. Visit them before it is too late!

Later this month, I am running a workshop as follows:

The botanical artist’s take on drawing and painting trees, with a visit to study, sketch and photograph the nearby Birnam Oak, weather permitting. Find out how to create rendered graphite images and experiment with wet on wet and dry brush watercolour techniques. Explore methods of working from photographs. We will also take a look at a selection of tree paintings by well known and not so well known artists to see how they have approached this fascinating subject.

All materials can be provided, but bring your own if you prefer. Sensible shoes, outdoor clothing and bring your camera.
Price includes a Soup and Sandwich Lunch

The story of this post begins with a book: Alan Mitchell's Trees of Britain 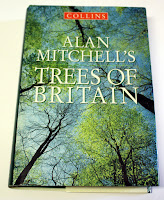 This is not an identification guide, but a survey of the individual trees of more than 150 different species. In his lifetime, Alan Mitchell measured many trees of outstanding shape and size and this book records his findings. What you get is a practical guide as to where to find the best specimens.

The book was published in 1996, but many of the trees are still there.

As part of my preparation my upcoming workshop on drawing and painting trees at the Birnam Institute, I have been looking for good examples of sessile oak, Quercus petraea, and pedunculate oak, Quercus robur, to photograph.

Alan Mitchell says: 'At Gray House, Dundee, near the drive, a fine specimen is 102/24 ft', where 102 ft is the estimated height, and 24 ft is the circumference.

Google 'Gray House' comes up with a building at risk also known as the House of Gray: 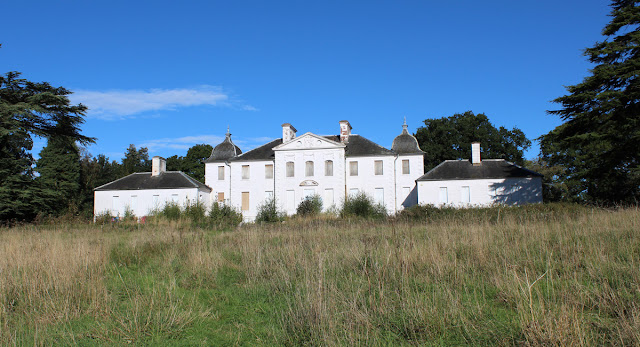 A few days ago, we visited this beautiful classical country house. You can find out more by clicking the photograph to get to the Buildings at Risk Register for Scotland.

Did we find the tree? 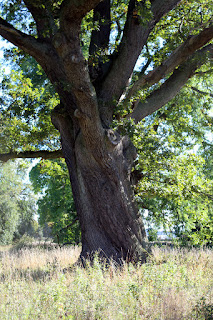 Maybe. We did find a couple of potential candidates and enjoyed a meander around the house and grounds. All seems secure, although there has been recent graffiti and other vandalism. 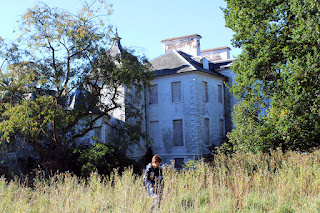 Bought a Euromillions lottery ticket on the way home. Got 1 number right, which is 1 more than we got on the previous occasion..

Enjoyable event at the Botanic Cottage at the RBGE in Edinburgh on Thursday 27th, meeting up with author Greg Kenicer to collect a pre-publication copy of his book Scottish Plant Lore, An illustrated flora: 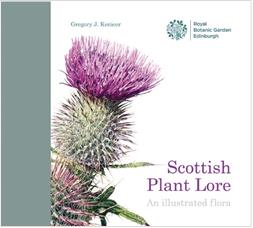 Greg describes the plants of seashores, wetlands, grasslands, woodlands, moorland and mountains and human habitats, all in his inimitable clear and informative style. This is a beautifully designed and produced book with illustrations from historical sources and contemporary work by many of Scotland's finest botanical artists.

The book will be appearing in bookshops across Scotland very soon, in time for Christmas, and of course you can buy it online:

⇩ The Botanic Cottage is well worth a visit. It was moved brick by brick from the original location of the botanic garden off Leith Walk and rebuilt inside the RBGE, providing additional facilities for visitors and students. 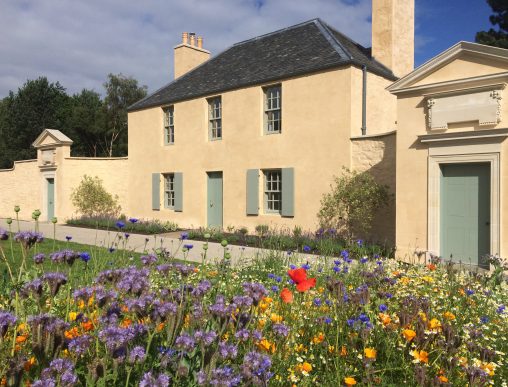 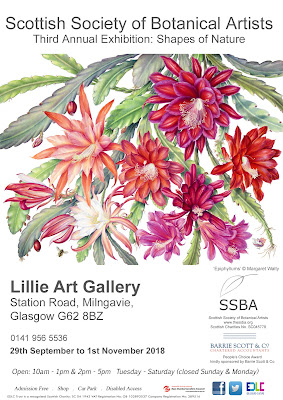 Five of my paintings are included in the Exhibition: 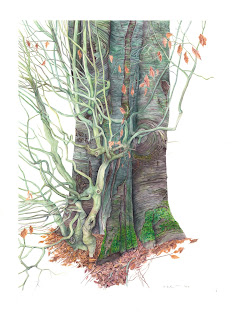 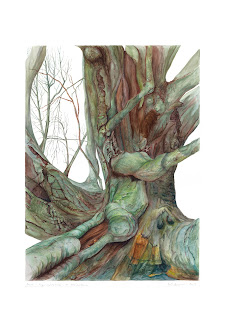 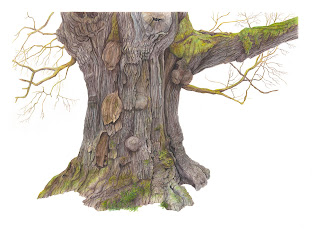 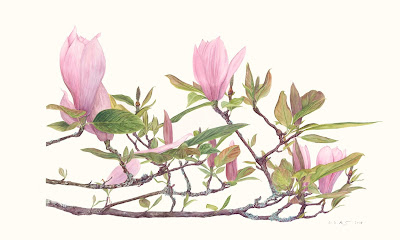 There is a story behind each of these paintings.. and more posts to add.

Foxgloves in Graphite and Watercolour